The Wait is Finally Over

Wuthering Frights is on sale now. All your questions will be answered. There will be endings…some happy! Don’t miss the fifth book of the Goodnight Series. 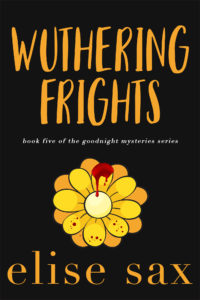 I shivered and pulled my cardigan around me. Amy was long gone, and it didn’t look like she was going to return and shed any more light on her death or the serial killer. She had left me with questions and the suspicion that the man I loved was a psycho killer.

Now I was going to have to clear his name or send him to jail. It was up to me to find out the truth, catch the serial killer, save the girls, and hopefully get married to a gorgeous cowboy dinosaur hunter with five percent body fat.

How hard could that be?

What is Wuthering Frights About?:

Matilda Dare has a ring on her finger, a thriving business, a beautiful, historical home, two dogs, and an amazing group of friends. She should be happy. But her fiancé might be a serial killer, the sheriff’s dead wife is visiting her, and her husband has escaped from prison. All of that is throwing a wrench into Matilda’s celebrations. The FBI has left town, and the local sheriff is hiding away because he’s still in mourning over his wife, and now it’s up to Matilda to find the real serial killer, save the abducted girls, and find her own happy ending.

Wuthering Frights is the fifth installment of the funny small town mystery romance Goodnight Mysteries series and a spinoff of the Matchmaker Mysteries.

Coming soon! The first book in a new series available for preorder now:

Living in a haunted lighthouse in the small town of Sea Breeze, California with her two elderly aunts, Agatha Bright has everything she wants. She owns and runs a bookstore / soup shop on the beach, and her soups are loved by everyone in town. Her life is regimented and organized.

But Agatha has secrets that might get her in big trouble. Dark secrets.

When a woman goes missing, the suspicion falls on Agatha and her soups, turning her life upside down. The new detective in town, Remington Cumberbatch, has seen a lot of weird things as a detective in nearby Cannes, California, but he’s in for a surprise with Agatha, her family, and the quirky town of Sea Breeze. He begins to investigate Agatha as the number one suspect, but the attraction is immediate.

When the missing woman turns out to be murdered, the mystery deepens, and Agatha must help Remington find the killer before she winds up in prison…or worse.

The Fear Hunter is the first installment of the Agatha Bright Mysteries, a funny, romantic, small town cozy mystery series with a touch of magic. It is a spin-off series of the Matchmaker Mysteries and the Goodnight Mysteries with some characters from both. 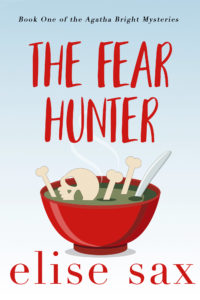 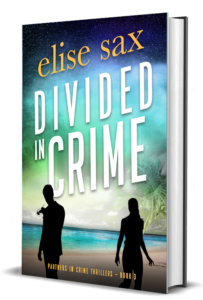 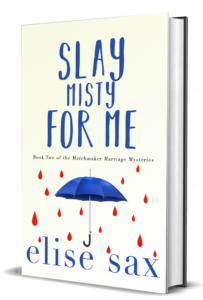