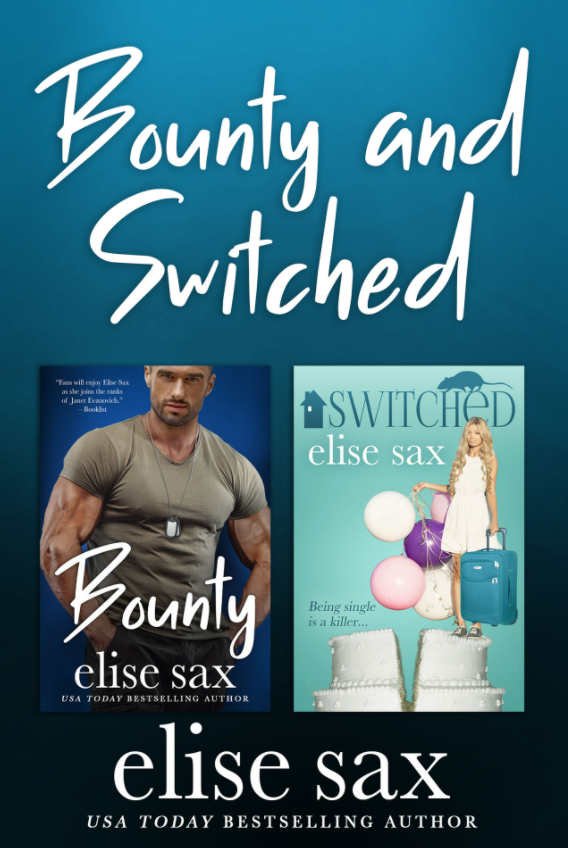 Bounty:
Abby Williams just got a promotion. The job in London comes with perks aplenty, including a trip to an exotic island to review a five-star resort with poolside service. Unfortunately, on day two of her vacation, Abby finds herself bound and stuffed into a burlap bag, on her way across two continents.

Iain Brodie is a muscle-bound mercenary. He just helped a despotic dictator take over an island. He’s also Abby’s kidnapper, and he has his own problems. Framed for a murder he didn’t commit and a boss who’s out to get him, he has to face facts: Early retirement is out of the question and Abby Williams looks damned good in a burlap bag.

Elise Sax delivers another hilarious page-turner. Bounty is a sexy, wild ride, and is certain to appeal to fans of Romancing the Stone and National Treasure.

Switched:
Debra’s wedding day ended when the groom jilted her three hours before the ceremony, leaving her with a stiff catering bill and a broken heart. Now, he’s off to Bora Bora on a one-man honeymoon, and she’s on the couch in her wedding dress, watching Christmas movies and eating her way through the corner market. Inspired by her movie marathon, she decides to do a home exchange on a Spanish island to get over her ex. But Debra’s life is nothing like the movies, and her home exchange goes terribly wrong. Stranded, she draws the attention of a hunky cafe owner who might know more than he admits about the disappearances of some local women. If Debra’s not careful, she may be the next one to disappear.